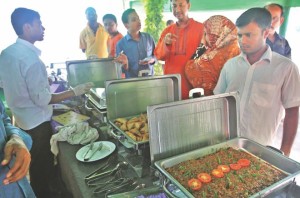 With locals rushing to different stalls for diverse delicacies, Chittagong city’s iftar market has gained momentum since the beginning of Ramadan.
Though most residents prefer to have homemade iftar, some go to the market to shop for special items like jilapi, firni, halim, chicken tikka, kabab, pizza, roll, lassi and dodhi to make the ritual of breaking fast more pleasing.
“My wife prepares iftar items like chana, halua, piaju, beguni and noodles at home. I have just come here to buy jilapi, halim and firni,” said Ishtiak Ahmed, who was spotted at an iftar items outlet in Lalkhan Bazar.
Some exclusive restaurants and eateries in the city are drawing big crowds with their unique array of iftar delicacies.
One such popular iftar outlet is that of Rodela Bikel, a restaurant located at MA Aziz Stadium Market, which emphasises on nutrition and hygiene when preparing iftar items. A good number of customers throng the shop searching for delicacies.
For quality and taste, Rodela Bikel acquires beef from Mirsarai, mutton from Kushtia, chicken from Banshkhali and red potatoes from Dohazari-Chandanaish, said Manjurul Hoque, restaurant manager of Rodela Bikel, adding that they use sunflower oil and pure ghee to prepare the iftar items.
Of its special items, jilapi is sold at Tk 300 per kg, special akhni at Tk 225 per serving, jali kabab at Tk 40, tandoori kabab at Tk 100 and kima chap at Tk 40, he said.
Chittagong Club Limited has opened an exclusive iftar outlet on its premises.
The club officials claim that their iftar outlet is the largest in the country, selling around 200 fresh iftar items.
Besides club members, general people can have access to the iftar outlet through reference of any member, said Monzurul Alam Parvez, member in-charge of the outlet.
Another must stop is Banoful and Co, a sweetmeat shop, which has its own range of iftar creations this Ramadan.
Banaful has 35 branches in Chittagong, including 18 in the city, serving people in different localities, said Amanullah Aman, general manager of Banoful.
Handi, located in the city’s Dampara, with its 35 iftar delicacies is another popular spot for iftar shoppers.

Originally Published in The Daily Star